The nine power issues you need to know! 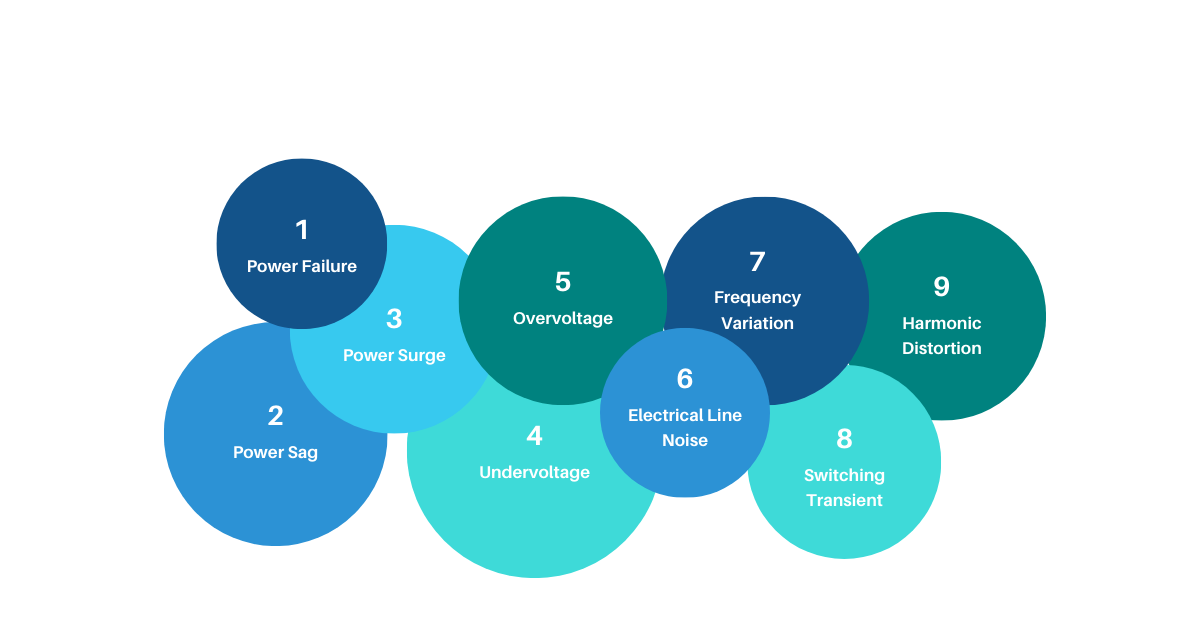 You might not be aware but there are nine types of power disruption, and they occur more than you think. These power problems are potentially harmful to your business, hardware, and data, so what are they?

The most common source of power issue is Power Failure or blackout and is the complete interruption of the electrical supply. Everyone has experienced this and it can be caused by a variety of sources including utility failures, storms, objects striking lines or poles, fire, and human error. Equipment damage and data loss are common consequences.

This is a sudden drop in the normal voltage level that can result in serious equipment malfunctions and is usually caused by faults on the transmission or distribution network, connection of heavy loads or start-up of large motors.

Another common issue, these are very fast voltage variations are triggered by lightning, line or capacitor switching and disconnection of heavy loads. These can destroy electronic components and equipment.

Also known as a brownout, this voltage drop can last for some time and is usually caused by overdemand or intentional “throttling” of electricity during peak demand. It can ruin computers and other electronic devices.

Caused by Electromagnetic interference or Improper grounding, these cause superimposed high-frequency signals on the waveform,

When the loss of stability in a power supply’s normal frequency of 50 Hz or 60 Hz is caused by heavily loaded generators. The problem can cause motors to run faster or slower, leading to inefficiency, excess heat and degradation.

Similar to a Power Surge, these momentary changes in voltage or current that can damage equipment stem from lightning, switching of loads and capacitor banks, opening, and closing of disconnects on energized lines, re-closure operations and tap changing on transformers.

This distortion of the normal power wave is generally transmitted by unequal loads and can result in resonance, overload, and overheating of cables and equipment, among other problems.